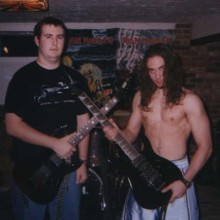 Armory is a power metal band that hails from Townsend, Massachusetts, USA and formed in the summer of 2001 by Chad Fisher (guitars) and Joe Kurland (guitars/drums). Heavily influenced by power metal and 80’s traditional heavy metal, the co-founders set out to create metal music that was epic, high-energy, and melody-driven. After several months of composing together, the foundations for ten songs would emerge as Armory’s debut album, The Dawn of Enlightenment. In late 2001 Armory saw the addition of two new members; Joe’s younger brother, Adam Kurland (vocals) and Thomas Preziosi (bass). All of these members were close friends in the same high school with the same heavy metal passion prior to the formation of the band. With the music of the songs established, the lyrics for The Dawn of Enlightenment would be the next task. Since the band members loved philosophy, fantasy, and epic adventures, the lyrics took on these themes. Joe wrote some of the lyrics, yet most were written by Adam and Jason Kurland (the eldest Kurland brother, though not officially a band member). Ever self-critical of their own song writing and performing, it would take three years of constant rewriting and rerecording before even the 2004 demo version of The Dawn of Enlightenment was complete. At the time, the band simply lacked the proper production equipment and expertise to produce an album with professional sound quality. Also, with uninspired artwork and an unoriginal band logo, the album did not have that professional look and so this version was never officially pressed or promoted. 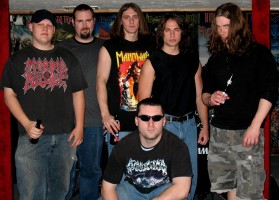 Undaunted, In 2005 Armory decided to take things to the next level by rerecording their entire debut album professionally with producer/engineer Peter Rutcho. This was done in order to have sound quality on the same level as any leader of the genre and to finally bring justice to the already professional composing and performing that was present on the original recording. Armory took the opportunity to revise the songs one last time and completely rework the vocal melodies. Also, unlike the programmed keyboards on the original 2004 recording, the keyboards on the rerecording were real and performed by Peter. With his many talents and increased interest in the music, Armory decided to recruit Peter as their newest member (keyboards). The band also hooked up with Steve Goad, a Texas-based artist who produced the incredible new album artwork. In addition, Joe created Armory’s official band logo to add that professional touch. The rerecording of The Dawn of Enlightenment was released on December 28, 2007. The album consists of ten original songs (revised versions of the same songs on the 2004 recording); including a majestic intro, a triumphant ballad, an ass-kicking instrumental, and a classic epic. In addition there are two bonus tracks which were recorded at the same time as the rerecording (covers of Iron Maiden’s “Flight of Icarus” and the first stage in Dr. Wily’s level from the NES video game, Mega Man 2). Overall, the album contains over an hour of passionately crafted melodic power metal. Although the drums on the rerecording were again played by Joe, the band needed to find another drummer so that their live performances would include two guitarists and have a more preferable sound. To complete the band lineup, Armory offered the drum duties for their live shows to Tom Vieira, a long-time friend of the band. Once the lineup was complete, Armory began playing live locally as a six-piece. The crowd response was very positive. In the months to follow its release, The Dawn of Enlightenment was given glowing reviews by well over one hundred reputable metal webzines and some prominent metal magazines, featured on dozens of radio stations, and distributed to numerous music stores worldwide. The band has also done several interviews and shows to promote their debut album, including gigs with Joe Stump and Banshee. 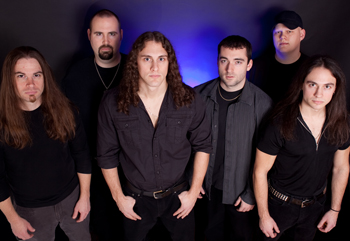 Behind the scenes Armory had been scrupulously composing and perfecting the material for a second album starting as far back as 2002. By intensely analyzing song structure, chord progressions, and meaningful melodies, the band leveled up their arsenal of song writing ability. Empyrean Realms contains nine original songs, each showcasing the band’s maturation in composing, arranging, and musicianship. Compared to their critically acclaimed debut album, Empyrean Realms has more dynamic composing and arranging, with more colorful melodies, head-banging riffs, key changes, and progressive elements. The vision was to create meaningful songs where each instrument would complement every other and also be able to stand on its own as being both impressive and interesting. The composing for this album was again done exclusively by Chad and Joe. Each member excels at certain aspects of composing, as Chad tends to work best writing riffs and building the foundation for most of the songs, while Joe tends to work best layering and arranging most of the songs and constructing the vocal melodies. The lyrics have become more articulate, centering on the themes of metaphysics, cosmology, epic stories, and the power of human will. Once again the Kurland brothers three wrote all the lyrics, with Adam contributing the majority. The drums and keyboards for Empyrean Realms were engineered by Peter while the guitars, bass, and vocals were engineered by Joe. The drums, guitars, bass, and vocals were recorded at Mystic Star Studios, based in Townsend, Massachusetts, USA. For this album Joe was the main editor and producer. Peter once again took on the task of mixing and mastering at Damage Studios, based in Southbridge, Massachusetts, USA and also recorded the keyboards there. The celestial cover artwork, produced by England’s Gary Tonge, helped to enhance the cosmic scope of the album. The album booklet for Empyrean Realms tripled in size and scope from their debut album and was once again created by Chad, Joe, and Adam. Empyrean Realms was finally officially released on November 12, 2013. The album was released by Joe’s newly created label, Metavania Music and is being heavily promoted. The label has already released keyboardist Pete’s solo band, Vomitron’s album, No NES for the Wicked, featuring metalized covers of original NES game music. In support of the release of Empyrean Realms, the band revealed a newly designed website with an improved official Armory store. Armory believes Empyrean Realms is a huge step forward for the band and an album which displays a style and sound which is more uniquely their own than ever before. After years of painstaking dedication to their second album, the band was excited to finally unveil it to the world and welcomed all comments and critiques.

On March 12, 2014 the Japanese edition of Empyrean Realms was officially released through Spiritual Beast (the label that released the Japanese edition of Hibria’s acclaimed album, Defying the Rules). This Japanese Release of Empyrean Realms features three cover songs as bonus tracks, including Riot’s “Thundersteel”, Helloween’s “Where the Rain Grows” (which was also featured on HelloRay – A tribute to Helloween & Gamma Ray and released through Epicus Records in the spring of 2012), and Virgin Steele’s “Love is Pain” (which was also featured on By the Gods: A Noble Tribute to Virgin Steele). Armory has also recorded a cover song of the battle theme music from the SNES video game, Final Fantasy: Mystic Quest, although it has yet to be officially released in any form. Licensing Empyrean Realms in Japan is a major move for Armory to increase their international fan base. To further their national presence, Armory played at Warriors of Metal Fest VII in Ohio at the end of June 2014. At The Worcester Palladium in the spring of 2016 Armory twice played direct support for some of the most recognized power metal bands. First, with Sonata Arctica and two months later with co-headliners Luca Turilli’s Rhapsody and Primal Fear. Throughout their entire history, Armory has been the epitome of a self-made, self-reliant music band. Everything from the composing, performing, engineering, mixing, mastering, designing, producing, financing, managing, marketing, promoting, and releasing of their music has been done exclusively by the band members themselves. Armory is very proud of the fact that there is no outside governing entity which has any influence on their music or image whatsoever. Thus, the future looks very promising for this uncompromising band dedicated to perfection of their craft. Armory would like to thank all the people who have supported them and their music, especially fans like you! Long live heavy metal and all forms of art created with true passion!